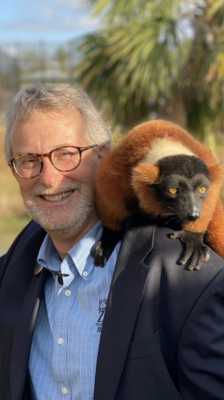 Mr. Hamilton comes to us with a long history of zoo-related work. In the early 1980s, Joel graduated from the Moorpark College, in Moorpark, California, with a degree in Exotic Animal Training and Management. Soon after, he joined the Dallas Zoo Bird Department, where he served as a keeper and later as the Supervisor of Birds for the Wilds of Africa section. Joel worked at the Roger Williams Park Zoo as the Curator of Australasia and Tropical America. Joel also was the Zoo Director for the Salisbury Zoo on the Eastern shore of Maryland. He holds a Master of Landscape Architecture degree from the University of Texas – Arlington. He is a licensed landscape architect and has operated his own firm, ENVIRONMENTS: Designs for Human~Nature, as well as working as the Senior Zoo Associate for McFadzean, Everly Associates in Evanston, Illinois.

Joel has also participated in several field research projects. He delivered the Dallas Zoo’s first Andean condor egg to the Los Angeles Zoo for inclusion in the Condor Project. He lived in a tent for a month in the Amazon forest of Peru while collecting data for a population study of understory birds. Joel also traveled to Cuba to assist with a field population census of the Cuban Amazon parrot and the Cuban crane.

Joel enjoys spending time with his wife and two children. Traveling, observing wildlife, and showing his family, the world around us are important past-times. As an avid fly fisherman, a fly rod is never far from his reach!

Mr. Hamilton is very proud to be here and glad to be your new Director!

"Out of the way zoo but WELL WORTH IT!"