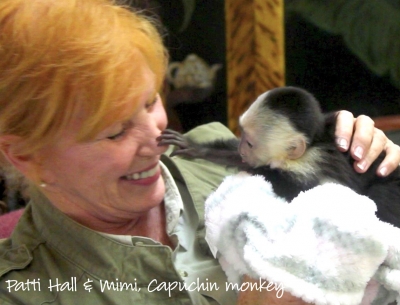 Patti Hall’s extensive background in management, education and public speaking contributed to the success of her endeavors as Director of the Alabama Gulf Coast Zoo for over 23 years and now as Director Emeritus. After college, Patti was appointed Director, Montessori of Kentucky Herr Lane Academy in Louisville. Five years later, she assisted in spearheading an innovative pilot project funded under the Older Americans Act. During her eight years, four centers throughout Louisville provided many public services to over 60,000 seniors, and 45 years later, the program is still going strong. Patti also spent 16 years in publishing, holding key management positions with the American Cities Business Group, and as General Manager for American International Publishing Inc., publisher of International Business magazine, in Rye, New York.

Patti’s professional zoo experience was inspired early on by her childhood affinity with animals and time spent at the Louisville Zoo while she was a college art student. Years later, after resettling in the Gulf Shores area, her love of zoos led her to Zooland Animal Park where in 1995, she became a passionate volunteer. Then two years later, she was appointed the zoo’s director. Later renamed the Alabama Gulf Coast Zoo, it was in a region that lacked a bustling tourism industry, as it is today, making it difficult for the financially struggling small-town zoo to survive year after year. But Patti’s heart was dedicated to the zoo’s animals and she always loved a good challenge. She set some big goals: to make community outreach, fundraising and publicity integral to turning the zoo’s fortunes around; to transform this small, roadside attraction into a zoo facility that placed animal care as its highest priority; to offer an intimate, charming, family-friendly environment that emphasized educating the public, especially children, about the animal kingdom. Within a few years, Patti was well on her way to achieving all of these goals, when a catastrophe struck the zoo that upended their entire world.

In Mid-September 2004, Hurricane Ivan struck the Gulf Coast, ravaging everything in its path. The town of Gulf Shores and the Alabama Gulf Coast Zoo was about to become its next target. Patti made the most difficult decision of her career – to try and save the lives of the zoo’s animals before they would all drown from the storm’s massive flooding. She pulled together her staff, community volunteers and what resources she could quickly find. Within 36 hours, Patti and her courageous zookeepers made history and became the first American zoo to execute a full-scale, off-site evacuation during a natural disaster. They transported over 265 animals to Patti’s home and property, along with her entire staff’s families and pets, to escape the deadly storm. After the zoo was completely destroyed, they all lived at Patti’s for 9 weeks while makeshift repairs were made to some of the zoo’s most urgently needed exhibits.

This daring rescue mission was unheard of in the zookeeping world, but the international press and broadcast media recognized Patti’s extraordinary achievement and came calling. Patti was chosen Person of the Week on PETER JENNINGS WORLD NIGHTLY NEWS; NATIONAL GEOGRAPHIC and PEOPLE magazines also featured Patti; and THE WEATHER CHANNEL featured the zoo in one of their Animal Storm Story episodes.

Ultimately, Patti’s professional and personal recognition hit a peak when she became the star of the 13-part, hit documentary series, The Little Zoo That Could on ANIMAL PLANET throughout 2006. In addition to hundreds of articles, magazine features, personal appearances, speaking engagements, and regular local radio and TV segments, Patti has also appeared on The Late, Late Show with Craig Ferguson on CBS, CNN, GOOD MORNING AMERICA, and with legendary animal experts Jack Hanna, Jim Fowler, and Siegfried Fischbacher of Siegfried & Roy. 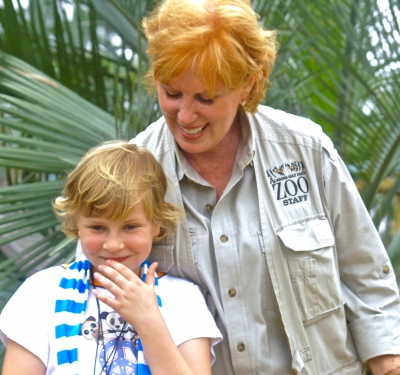 As a result of her years of experience as a leader and educator, Patti’s savvy skills put the Alabama Gulf Coast Zoo in a whole new light and turned it into a raging success. As people from around the world flocked to see the Little Zoo, it also helped put the town of Gulf Shores on the map as a popular tourist destination. Patti also received the State of Alabama Tourism Director of the Year award in 2006, was given the key to the city of her hometown of Reading, Ohio in a ceremony declaring October 23rd as “Patti Hall Day”...and through her unrelenting commitment to the lives of the animals under her care and to effect dramatic change in her community at-large, Patti was recognized in a 2015 ceremony as “Alabama’s 34 Women who Shape the State.” Clearly, the goals Patti set out to achieve when she first became Zoo Director have been met. But there’s one goal Patti’s dreamt of but never really thought possible – to move the Little Zoo off the barrier island and into a hurricane-proof location somewhere inland. And now, through the generosity of two long-time Gulf Shores families - the Wards and the Weirs - a brand new zoo is being built on 25 acres of prime real estate four miles north of the Gulf Shores Intracoastal Waterway. The New Alabama Gulf Coast Zoo will be reborn sometime in late 2019. Patti’s other goal? Director Emeritus, of course.

"The Animal Encounters are Awesome!"