Late Friday, September 4, Jabari, our African male lion, lost battle with  Throughout the summer, many of you asked about Jabari as he would periodically seem disoriented, stumble, or simply appear “off”.  Jabari was born with a rare neurological condition, referred to as a Chiari malformation.  His skull was mis-shaped in such a way that it restricted spinal fluid from properly flowing along the spinal cord and around the brain. 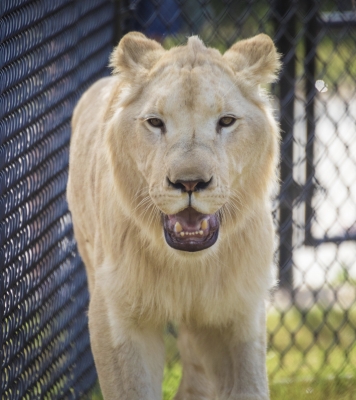 Jabari was raised at the Alabama Gulf Coast Zoo and was a favorite of his keepers and guests. The Zoo’s animal care staff noticed minor behavioral problems early on and he has been under veterinary watch for some time.  The diagnosis of a Chiari malformation was made by our veterinary team a couple of months ago.  Animal staff spent countless hours working with him and modifying his habitat to make him comfortable. As he grew and his skull became larger, his condition continued to deteriorate.

The Zoo sought extensive care and treatment that included a rarely performed surgery to correct the issue.  Our veterinarian, Dr. Langston, put together an incredible team of specialists that included his own staff, a large group from Auburn University, a local neurosurgeon and her team, as well as our own staff.  It was a herculean effort to provide relief for Jabari, who would have turned two this month.  The team did a great job.  Unfortunately, Jabari passed late last evening.

Thank you to all of those who came together to perform this intricate surgery.  While the outcome was not what any of us wanted, your dedication and efforts are much appreciated.

The hardest part of zoo work is saying goodbye to the animals we care for and love.  Jabari brought much joy to the zoo staff and our guests.  Thank you for your support as we struggle with our loss.

The Alabama Gulf Coast Zoo has two other African Lions, Simba, and Nandi.  Three-quarters of African lion populations are in decline. With only around 20,000 left in the wild, they are now officially listed as vulnerable.