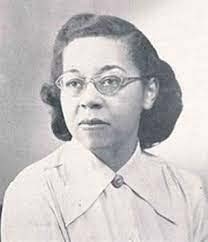 In 1949, Dr. Alfreda Johnson Webb became the African American woman to receive her Doctor of Veterinary Medicine (DVM), making her the first woman to graduate from Tuskegee Institute and the first African American woman to graduate from any school of veterinary medicine in the United States. She then served as a professor of biology at North Carolina Agricultural and Technical State University (NC A&T) from 1959 to1978. During her time at NC A&T, she was a member of the planning committee which founded the School of Veterinary Medicine of North Carolina State University.

In the spirit of Black History month, I would like to propose ideas that spread awareness and inform our patrons of history in relation to some of our exhibits. We as Americans have progressed as a society by providing new findings in medicine, healthcare, technology, agriculture, and business. Although we have progressed tremendously as a nation, we have not always had equality among races. On January 31st, 1865, the United States passed laws such as the 13th amendment to protect the right of formerly enslaved people, formally abolishing slavery in the U.S. In the month of February, we celebrate what African Americans have contributed to our American history.  I would like to further educate everyone on African American pioneers in Veterinary Medicine, Veterinary Sciences, and agriculture by featuring pictures and facts of different scientists once a week.
Being that African American men and women only make up less than 3% of the total veterinary population, the world is now striving for racial diversity in this field. I, myself, am a graduate of Tuskegee University with a B.S. degree in Animal, Veterinary, and Wildlife Sciences, a university that is phenomenally rich in African American progression. It would be an honor for me to pass on that knowledge to our zookeeper staff & anyone else who could gain insight.

"Out of the way zoo but WELL WORTH IT!"